I went to a hugely inspiring silver clay workshop at the Metal Clay studio on Saturday, taught by Emma Mitchell of Silver Pebble. The class was on taking imprints of natural materials in silver clay, to make beautiful pieces for jewellery. I’ve never worked with silver clay before, so I was a bit worried that I was jumping in at the deep end, but I’ve long been intrigued by the beautiful nature-inspired pieces that Emma makes, so since the workshop was just a half hour drive away, for me the it was unmissable.

I needn’t have worried, Emma explained that the class was intended for total beginners and she went gently through every step of working with this new (to me) medium.

I’d brought some of the little ammonite fossils I’d collected on a recent trip to Charmouth, as I was very keen to replicate one of them in silver. I also used a little piece of oak moss lichen that Emma had collected, because I simply love lichens.

This is a photo of all the class’ projects. 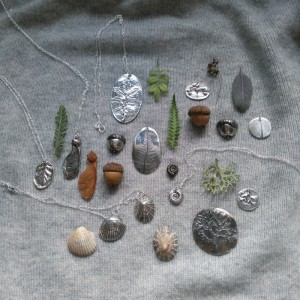 And here are my two pieces. 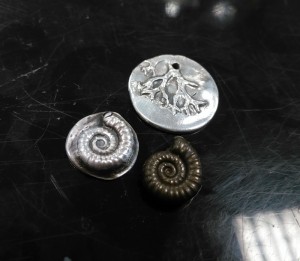 I absolutely love how my little fossil and lichen pendants turned out.  I bought more silver clay from Metal Clay while I was there, along with some tools to work with it.

Much as I loved the class subject matter, I was perhaps even more inspired by Emma’s approach to her subject and her ideas on the wider implications of teaching people to make things by hand.  She explained how performing tiny repetitive movements with your hands, such as sewing or stringing beads has been shown to have an effect on the stress hormones produced by our brain, reducing cortisol levels and increasing dopamine.  Put simply, making things has a stress-relieving effect.

Emma also explained that this effect might have originated from our human ancestors, who would have had to make many things by hand simply so they could survive.  Clothing, hand-axes and knives, foods such as flours that were ground by hand, all would have involved hours of repetitive manual work to make.  I can understand how people who enjoyed doing these things would have had an evolutionary advantage, as they would have been less stressed and more able to deal with the problems of every day life.

This has huge implications for us today.  Even if we have a job that involves repetitive manual work, we’re still likely to be interrupted by phone calls, Facebook messages and so on.  We rarely look upon a manual job that’s going to take a long time as a good thing, and yet the evidence is that this is exactly what benefits our mental well-being.

One of the jobs I most enjoy on the farm is the summer’s task of tractor-turning the hay crop.  Haymaking is almost always fraught, as we’re often racing the weather to get the crop in safely.  Yet turning is something that can’t be hurried.  If you go too quickly the grass gets thrashed to pieces, and steering our 16 foot wide turner at speed is dangerous.  So turning is a matter of patience, and of repetitive motions as you steer around the rows of drying hay.  I rarely feel bored or tired after an hour or so of turning, instead I feel refreshed and creatively inspired, as my mind has had time to wander while performing a repetitive manual task.  I know many other smallholders who feel the same.  The commercial rush to produce larger tractors and speedier harvesting processes has reduced these benefits.

I’m not suggesting that we should do things in a slow slow or awkward way just because it’s ‘good for us’, but rather that we should accommodate projects that induce mindfulness, as they have unseen benefits on our psyche.