Yesterday we had a beautiful sunny day in our little corner of Dorset, so I took myself off for a walk with my camera. 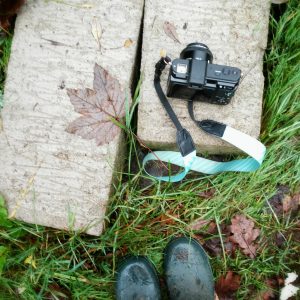 In the lane I spotted a few Brimstone Butterflies, who were fluttering around looking for ivy blossom to feed on.  Ivy is one of the last wild plants of the year to bloom, so butterflies and bees tend to make the most of it when it’s in flower.  The Brimstones are perfectly camouflaged amongst the shadows of the ivy leaves. 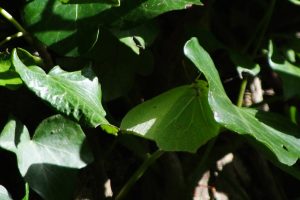 I took the chance to check on our little flock of rams en route.  Our badger-face Shetland (named Mr Badger of course) is looking particularly well at the moment. 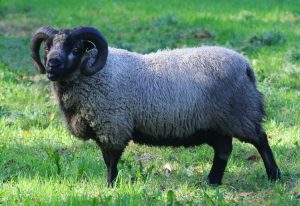 Although on closer inspection of this photo, I found he was rudely sticking out his tongue at me! 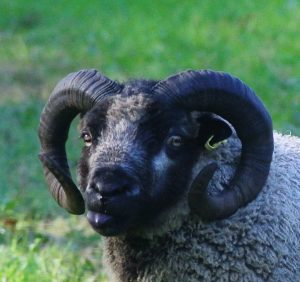 In the hedgrows there were some very pretty wild Bryony berries.  They’re poisonous to humans, but I believe that birds can feed on them without a problem. 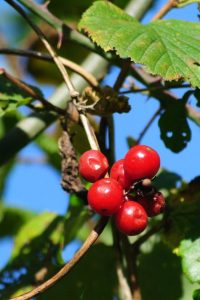 Back along the lane, my cat Maia was preoccupied with watching something in the hedge. 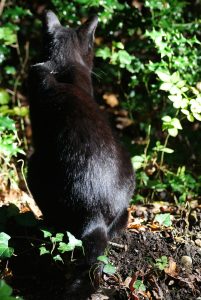 And on to the ewes’ field, where there were many Red Admiral Butterflies fluttering around the hedges and over the grass.  I think they were feeding on the horse manure.  Pretty as they are, Red Admirals do have some unsavoury food preferences… 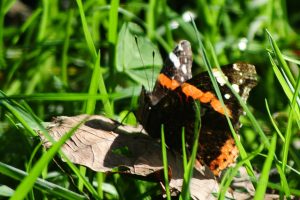 Here too there were red berries in the hedges, but these were Rosehips which, when cooked into jam, are tasty and packed with Vitamin C.  I think I’ll have to return here to collect some for jam-making. 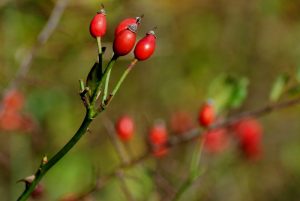 The ewes were all present, safe and the right way up (always a good sign in a sheep!).  Here’s Truffle, the Ryeland matriarch of the flock, with some of her gang. 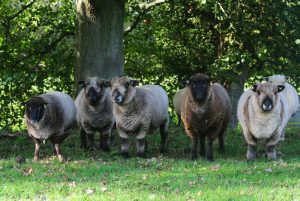 And finally, on the way home, I inspected the hornet’s nest that’s being constructed on the roof of one of our workshops.  Hornets are relatively uncommon in Britain, although we’ve usually had a nest somewhere on the farm each summer.  Contrary to popular belief, they aren’t at all aggressive towards people, unless of course they’re provoked.  We prefer to work around their activities, as I feel they have as much right to be here as we do.  The nest they’ve built this year is large and particularly beautiful. 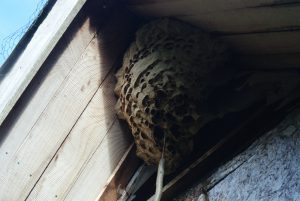 I’ve enjoyed putting this post together, so I think I’ll make it the first of an occasional series. It’ll be good to share my finds around the seasons.

You don’t have to live in the countryside to see interesting wildlife. I suspect that species such as butterflies linger out and about for even longer in urban areas where it’s warmer.  Have you seen anything interesting recently?  Do share in the comments below.

Lots of things afoot here at Wildcraft HQ at the moment. First of all, I’m delighted with the way the new website’s working out. If you haven’t had a look yet, do take a peek at www.wildcraft.co.uk. It’s shiny and new, and I’m told that it’s much easier to navigate than the previous version.

Last week’s club shipment went smoothly.  This month’s installment was BFL/silk in a colourway named ‘Honest Moons’, a subtle combination of pale grey and brown.  Here’s the view in the Wildcraft Wool Room last week.  As you can see, it was a pretty big dyelot this month! 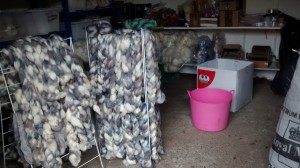 We’re gearing up for lambing, with the first ewes expected to have their babies at the beginning of April.  We have nine to lamb this year, but only three gimmers, all Ryelands – the others are all experienced Shetland mums.  So I’m hoping it’ll go more smoothly than last year, when we had 6 first timers.  I’ve been bringing all the pregnant ewes into the barn overnight, and as you can see from Piglet’s expression, they’re much enjoying the extra rations they’ve been getting! 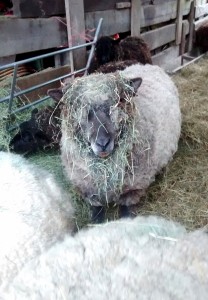 We’re planning to set up Sheepcam again this year.  Which will help us keep an eye on the ewes, but we’ll also make it available for you to see on the web. You can expect much fun over the next few weeks as you see all the lamby antics.

So lambing season is over for another year.  We’ve had a lovely lot of lambs this year, despite the challenges of the season.  This was the first year we produced Shetland lambs, and I have to admit, they weren’t easy at all.  Perhaps it was because all but one of our six ewes were first-timers (gimmers), but it seemed they threw as many problems as they could at us: twin lamb disease, difficult births, rejected lambs (giving us the first bottle lambs we’ve had in years), and poor milk production in the ewes.  I’m really hoping that they’ll have sorted all this out by next year!

The only Shetland who was totally straighforward was Alex, the last to lamb.  She surprised us all with this lovely little ewe lamb, who appeared as if by magic one afternoon.  Alex was the perfect mum to her, so this is one ewe we’ll definitely keep in the breeding flock. It was fun to share the lambing online again via Sheepcam.  The webcam in the barns is a huge boon to us, as we can quickly check up on the sheep in the wee hours without leaving the house. The ewes and lambs are now all out in the paddocks, eating as much of the sweet spring grass as they can.  They were shorn recently too, so we don’t have to worry so much about them overheating, or getting fly strike. I love watching the lambs playing during the long spring evenings.  They seem to have a lot of fun while they’re learning about what it means to be a sheep.  Here’s Tweed, one of the Ryeland lambs, rallying the troups it seems. It’ll be fun to see all of these little ones grow up.  I know the Ryeland breed pretty well now, and can already tell that we have at least a couple of lambs with excellent conformation (possibly prize-winning, if I can get my act together and actually enter some shows with them).  But Shetland lambs are new to me, so I’ve yet to find out how their baby fleeces and shapes transform into adulthood.  I’ll keep you posted with updates here as they grow up.